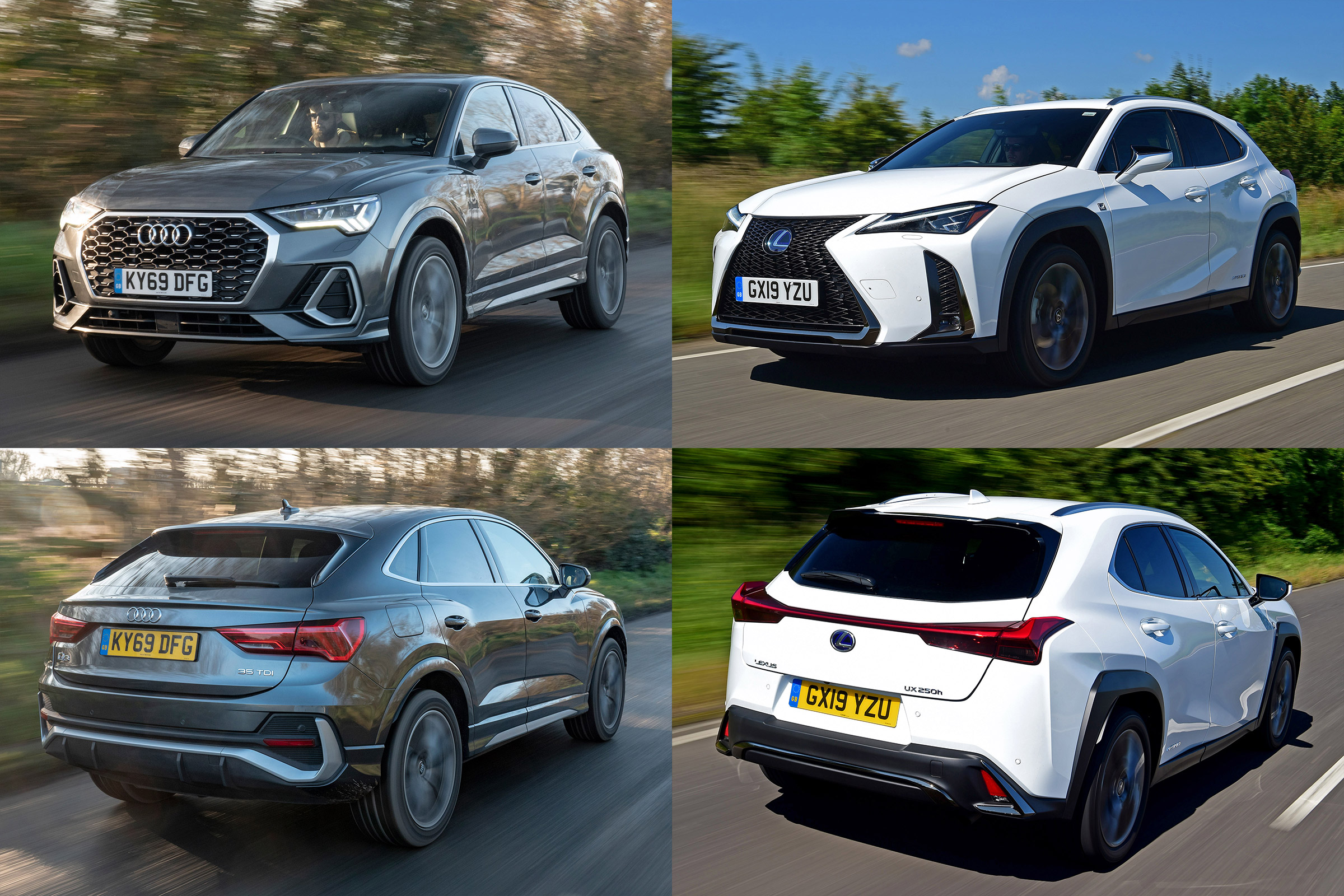 Posted at 11:08h in Car Brokers, Latest Motoring News by admin 0 Comments
0 Likes
The current SUV craze happened partly because style-conscious buyers were looking to stand out from the crowd. But now most manufacturers offer these higher-riding models, and that has meant that buyers are looking for the next niche: the coupe-SUV.

The Audi Q3 Sportback fulfils the brief nicely, combining conventional SUV practicality with coupe-like styling. But that puts it in direct competition with one of our favourite compact, coupe-like crossovers (and a previous road test winner in this magazine): the Lexus UX.

Practicality and value are important considerations here, but it’s also a battle between diesel and petrol hybrid. So we’ll see how these two cars compare for economy – yet another front where this fight will be won.

For: Stylish looks, good practicality and better infotainment than the Lexus.
Against: Not quite as efficient as UX, so higher running costs; slower, occasionally jerky gearbox.

Like many of Audi’s cars, this Q3 Sportback is based on the brand’s MQB scalable platform. Its versatility is highlighted by the fact that this architecture also underpins rapid sports cars like the TT RS in the brand’s line-up.

This car isn’t quite so racy, but all Q3 Sportbacks do get sports suspension, progressive steering and the Audi drive select system as standard. However, this sleeker model doesn’t drive all that differently to the standard Q3, with these features present on the Sportback – which, of course, is no bad thing.

The steering is a good weight in the default mode, but there’s little feel. It is nicely precise and responds well to inputs, though. The ride is generally fine as well, although on our car’s 19-inch wheels the suspension occasionally seemed unable to keep up, with sharper bumps felt in the cabin. Most of the time, however, on the motorway and sweeping roads, the Q3 was comfortable.

The engine is punchy enough, too, with the 2.0-litre TDI producing 148bhp and 340Nm of torque. The former figure is less than in the Lexus, but the Audi’s engine’s effortless torque means in-gear performance is smooth and easy. However, its 9.5-second 0-60mph sprint felt adequate but not particularly rapid. This was 1.5 seconds slower than the Lexus, partly due to less power and the Q3’s need for gearchanges compared with the seamless UX.

There are some negatives, because the Audi is far from quiet – but in a different way from the Lexus. The Q3’s diesel rattle is present more of the time than the drone from the UX’s powertrain, which is only really intrusive at higher revs when you need more acceleration, and at full throttle.

The Q3’s dual-clutch box isn’t perfect either. Neither transmission set-up from the cars in this test is, but when manoeuvring, the clutch take-up can be a little abrupt, while the box holds onto gears for a fraction too long. At least the shifts are smooth in auto and snappy in manual.

The Sportback is 16mm longer than the standard Q3 and sits 49mm lower, and its silhouette is definitely sleeker as a result. To back up the style, there’s plenty of equipment in S line trim. Half-leather sports seats, LED headlights, climate and cruise control, a 10.1-inch touchscreen infotainment system, a 10.25-inch digital dash, Android Auto and wireless Apple CarPlay, some solid safety systems and parking sensors are all included. The quality of a few of the materials lower down in the cabin is a bit suspect, though, while the design is also bland in places. Still, the majority of the interior is interesting to look at and well built.

The UX takes a different approach to economy, with Lexus employing its now tried and tested petrol-electric hybrid tech to keep CO2 emissions low despite offering more power than the Q3.

The power sources are managed by a CVT automatic gearbox, which is better than ever in this fourth generation of the firm’s hybrid powertrain. CVTs used to mean a roaring engine when you touched the throttle but there’s a more connected feel to the UX’s set-up. It’s still not perfect and gets noisy when you ask for full acceleration, but around town and when cruising the Lexus makes good use of its battery and motors to boost performance; just don’t expect much EV-only range.

It had the measure of the Audi for performance, accelerating from 0-60mph in 8.0 seconds and beating it from 30-50mph and 50-70mph – but these are kickdown acceleration figures. Most of the time, you won’t notice much difference between the diesel Q3 and the hybrid UX.

One thing worth noting is that Lexus calls this a ‘self-charging’ hybrid. The battery is topped up when slowing down gently and at certain points when the engine is in use; the car manages this and the battery’s energy level intelligently.

The Lexus rides sweetly and deals with most bumps softly. Like the Q3, it’s not immune from the odd crash and thump, though, and it doesn’t feel as dynamic or as involving to drive as the Audi, despite the Lexus weighing 40kg less than the Q3, even with its battery pack.

The steering is less direct than the Audi’s and there’s a bit more roll, but these cars are not as much about dynamic ability and more about style, kit and convenience, which the Lexus delivers.

It’s close, but the Q3 Sportback just shades the UX. The Audi has a little less kit but it has what you need, and the infotainment is much more advanced. Performance is adequate, if not on the UX’s level, and the ride and handling are fine. The usability, tech and practicality edge it ahead.

Everything that makes the UX a good car is still here – as is everything that holds it back, save for new smartphone tech. If you’re after a hybrid, the UX could be a great choice thanks to its refinement, kit, and efficiency. But if you want practicality and easy infotainment, the Q3 is better.