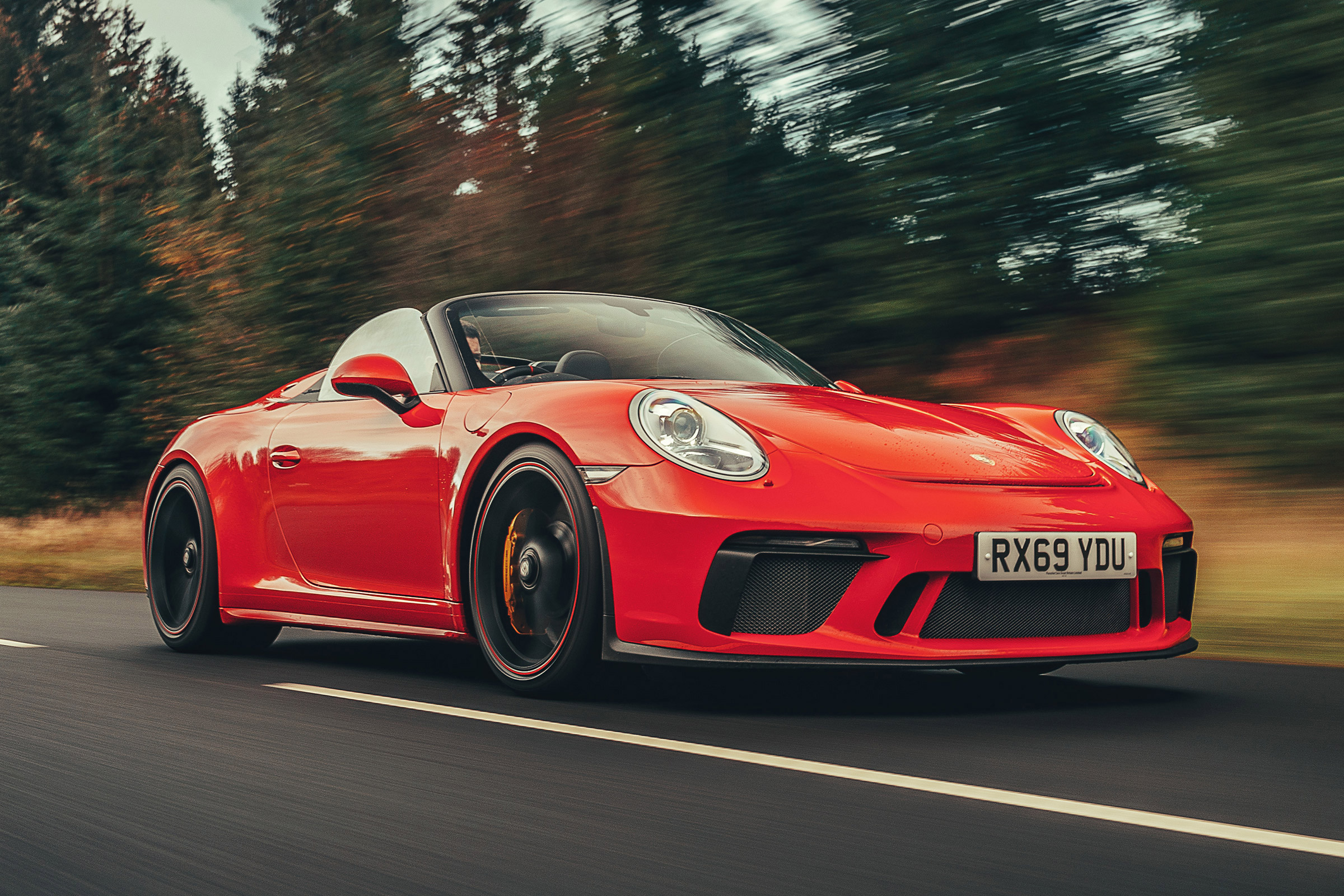 Posted at 16:17h in Car Brokers, Cars, Latest Motoring News by admin 0 Comments
0 Likes
The temperatures are dropping and the long, dark nights are drawing in. So of course now is exactly the right time to think about sinking more than £210,000 into an open-topped, rear-wheel-drive Porsche 911.

But this is no ordinary 911. In fact, it’s not even the latest 911. This is the Speedster, which is based on the previous 991-generation of Porsche’s famous sports car, and was built in limited numbers as a 70th birthday present to itself.

Having said that, even if you want one, you can’t have one. The UK allocation of the 1,948 global production run has already been sold, so be prepared to hit the classifieds and pay considerably more than the list price if you’re interested – there’s currently one for sale privately for £1million.

And why wouldn’t you? It’s perhaps one of the prettiest 911s ever built: The exaggerated buttresses resting just behind the cockpit combined with the more steeply raked windscreen than you’ll find on a regular 911 (an extremely costly engineering task in itself) make for a striking silhouette.

The roof is the Speedster’s party piece, although it does require manual operation. A small switch on the centre console unlocks the top from the body, but you then have to get out, lift the Speedster’s enormous carbon fibre rear deck, and fold the fabric roof into the vacant space. You’ll need to be confident that urgent refuge from rain won’t be required before you decide to lower it – not a given in the UK.

Beneath the skin, the Speedster is a bit of a Frankenstein’s monster. The chassis and front end is borrowed from the 911 GT3, the bonnet and front wings from the 911 R, while the rear end is from a GT3 Touring. It’s also dressed in various other carbon fibre panels to keep weight down. That rear deck, in fact, is the largest single piece of carbon fibre found anywhere in the VW Group empire.

But the cherry-picking from Porsche’s GT division doesn’t end there. Nestled over the rear axle sits the 4.0-litre naturally aspirated flat-six from the GT3 – but in the Speedster it kicks out an extra 10bhp, to give peak power of 503bhp, with 470Nm of torque.

Slipping down into the Speedster’s cabin, the car’s sole focus is immediately obvious: driving. There’s a bare, dainty steering wheel trimmed in leather, and a short, stubby gearlever protruding from the transmission tunnel. There’s even the option of removing the air conditioning unit and infotainment system completely for those after a full modern-day detox.

The process of starting the Speedster is refreshingly old-school; stick the key into the dash, dip the clutch, twist the fob and listen as the flat-six settles to a delicious bassy idle. Despite the Speedster’s origins as a GT car, it feels reassuringly forgiving, almost easy, to bimble about in at low speeds. The clutch is light, gearbox short and snappy, and ride quality eerily supple.

Go faster, and the Speedster gets better with every corner and mile that passes beneath its wheels. The 4.0-litre flat-six is the star, with an intoxicating cocktail of noise, power and usability. And more noise. It revs out to an ear-ringing 9,000rpm – and it’s worth hanging on to every last rev, even though your brain and left arm will be telling you to shift up 3,000rpm earlier.

The six-speed manual gearbox is equally joyful to use, with sharp, snickety changes. If you want to cheat there’s even an auto blip, rev-matching function to help smooth every downshift. It works incredibly well, never hindering the driving experience.

The next thing you notice is how balanced and poised the Speedster feels. The steering is pin-sharp and the chassis ultra-responsive, giving you ultimate faith in what’s going on beneath you. Even on slippery, damp UK roads, the Speedster’s front end digs in to the tarmac with unrelenting bite. You do have to be more careful with throttle inputs, though; the fat rear tyres squirm and fight for traction in such conditions.